The Queen’s pastry chef has revealed the secret recipe for the mince pies served at Buckingham Palace just in time for you to make them… for next Christmas.

A Christmas classic even the Queen indulges in, the recipe has been shared on the royal Twitter as people around the country are preparing to make their holiday mince pies.

But if you were excited to make your own mince pies fit for the Royal Family – we have some bad news.

According to the recipe, “Everything from the mincemeat to the pastry is handmade by the small team in the kitchens at Buckingham Palace. The mincemeat is made months in advance and stored in the pantry.”

Clearly, Royal Pastry Chef Kathryn Cuthbertson follows her own number one tip of advice, “Give yourself plenty of time.”

And Chef de Partie, Victoria Scupham, agrees, adding, “Pastry is not something that likes to be rushed.” 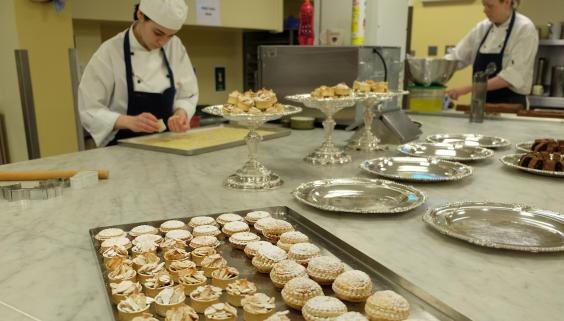 But considering the pair “create over 1,200 mince pies for each of the festive receptions held at the Palaces around Christmas time,” creating everything from scratch, it seems like advice worth following.

As for the actual recipe, it seems straight-forward enough.

The entire recipe for the royal Festive Mince Pies is as follows:

zest and some juice of 1 unwaxed lemon

zest and some juice of 1 unwaxed orange

Egg washed for sticking lids on the bases

Granulated sugar for the top of the mince pies before baking

Place all the dry ingredients into a large mixing bowl and stir. Then add all the liquid and grated apple and allow to soak for at least one week in a 1kg kilner jar sat in the fridge or pantry.

Roll the sweet pastry into a sheet approximately 2 to 3 mm thick, place on a tray, and allow to rest in the fridge. Once rested, cut tops and bottoms for your mince pies using fluted or plain cutters (selecting sizes to fit your tin). Place the pie bases into the tin and prick them with a small knife or fork to prevent the pastry from rising during the baking.

Spoon a teaspoon of the home-made mincemeat into the base and egg wash the edge of the pastry to enable the lids to stick. Place the mince pies in the fridge to rest for another 30 minutes, then add a pastry top to each, egg washing it and pricking a small hole in the top to allow the steam to escape. Sprinkle with granulated sugar.

Place the baking tray on the middle shelf of the preheated oven and bake the pies for about 15 minutes, or until the pastry turns golden and the mincemeat starts to boil slightly. Remove from the oven and allow to cool slightly before taking the pies out of their tin. Sprinkle the mince pies with icing sugar and serve immediately. To add a festive feel, the mince pie tops could be shaped with a star cutter or perhaps a holly-shaped cutter.