Some cuts can last more than six years without going off. What’s the secret?

It made the news in New York: The meat was getting out of hand.

Discontent was simmering in Whitestone, Queens, in the fall of 2016, where neighbours had been shocked to come across hanks of pork belly strung on a line in a house’s backyard. It would draw rats, they said, and the smell was a serious problem. The people living in the home merely replied it was for eating – in Chinese food, specifically. So the neighbors started getting public officials involved.

But in many parts of the world, this is not such an unusual sight. Walking down a quiet street in Asia, you’ll often happen on slightly macabre culinary set-pieces – long, thick slices of pork belly, draped over a clothes hanger, slabs of fish, or even, as I did once, a whole pig leg dangling next to a light post, hoof and all. As unnerving as it sometimes is to come across, these al-fresco meat dryers are doing something that’s been done for centuries, if not millennia: air-curing.

When we stress about forgetting the chicken breasts on the counter for an afternoon, how is it possible to leave meat — in the Sun, no less — for days, eat it, and live to tell the tale?

The key is moisture. Inside a length of pork, or that whole pig leg, there’s a race going on between bacteria and evaporation, with those hoping for a nice bit of ham for lunch egging the evaporation on.

In China, pork sausages are also often dried in the air

That process usually begins with salt. Coating a piece of meat with salt draws the water within the tissue out to the surface, where it evaporates, in much the same way that salting a slice of aubergine or courgette will get rid of its excess water. At the same time, the salt makes the surface of the meat and some portion of the interior inhospitable to microscopic bacterial beasts. That level of saltiness will strip them of their water as well, leaving only harmless microbe jerky.

With a large piece of meat, however, the evaporation race cannot draw out water fast enough to keep the interior safe. Injecting the salt, mixed with a tiny bit of water, deep into the muscle every inch or so, helps take care of that. This treatment often includes small amounts of sodium nitrite, a preservative that halts microbial growth at the same time that it clings to proteins in the muscle, in a chemical reaction that turns the meat a gentle pink. Water might encourage bacterial life, but in this case it also allows the cure, as the salt and nitrite mixture is known, to trickle further. That’s why, in many recipes for dry curing, the first stage is to leave the meat in a cool, moist environment, says Antonio Mata, a meat scientist and an adviser to the food website AmazingRibs.com.

If you draw out moisture too quickly, the surface of the ham dries out – Greg Blonder, Boston University

Once the cure has seeped into the meat, it’s time to turn the temperature up and play the evaporation game again – but gently. “If you draw out moisture too quickly, the surface of the ham dries out,” says Greg Blonder, a professor at Boston University and another scientist for the same site. Traditionally, the exact details of the process vary according the local climate – “Ham recipes depend on terroir,” Blonder notes – but someplace warm with carefully controlled humidity is key.

In China, as in many other places, home-cured meats ranging from preserved pork belly to wind-dried pork sausages are usually made in winter, when the climactic conditions allow meat to dry safely, and are considered a festive food. (Humans aren’t the only ones with a taste for cured meat, however; home curers should beware the cheese skipper, larder beetle, and red-legged ham beetle, warns a Virginia Tech pamphlet on curing ham. These whimsically named insects will lodge themselves and their growing families in a drying piece of meat.) 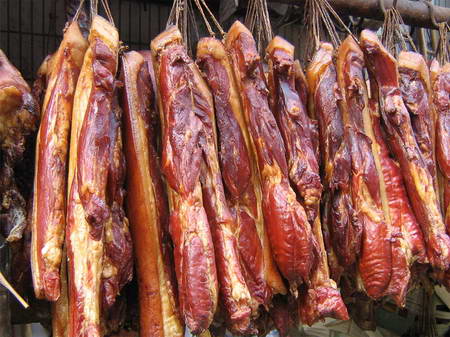 Salting the outside of the meat draws out moisture, making it harder for bacteria to survive

Even if you can dodge the cheese skippers, it can take months for a dry-cured ham to reach a tasty equilibrium. But many cultures around the world have proven themselves ready to wait. China’s famed Jinhua ham usually ages for at least six months; Italy’s culatello goes for 14-48 months. The most expensive ham in the world, from Spain, ages for six years, according to the Guinness Book of World Records.

The longer a ham goes, the funkier it usually tastes, as the fat eventually begins to go rancid. But for some, it’s all part of the taste adventure.

These days, the evaporation process takes place in carefully controlled chambers and can be stretched out for a surprisingly long time

Desiccation is also important to making dry-aged beef, that mainstay of high-end restaurants, where letting a cut of beef gradually lose moisture and grow a protective rind of mould, which is sliced off before cooking, produces a stronger flavour. These days, the evaporation process takes place in carefully controlled chambers and can be stretched out for a surprisingly long time, given that in dry-aging there are no preservatives to keep the meat from going off. In fact, Mata once worked with a chef in Chicago to produce beef that had been aged for 71 days.

In the past, however, home cooks had a decidedly low-tech approach. “Let it hang in your cellar as long as you can bear for the stinking,” reads one recipe from 18th Century England, “and till it begins to be a little sappy.”

Try running that one by the neighbours.